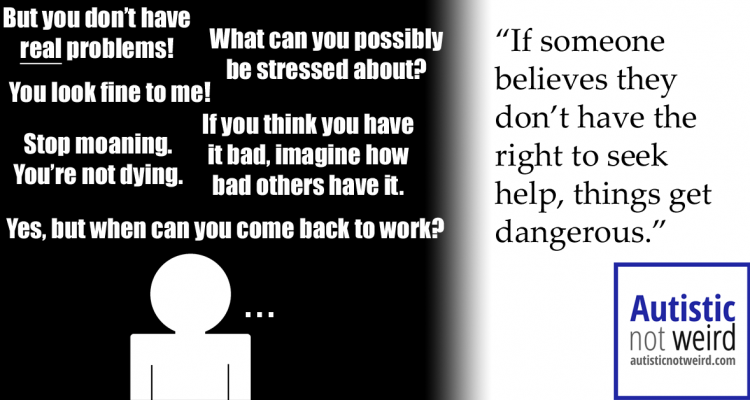 When you’re “not allowed” to have mental health issues

Or at least, that’s when the therapy started. I might have had mental health issues from childhood. It’s difficult to tell, because so much of it just felt normal.

When I look back, the reason I never sought professional help was because it was for “other people”. As a child in the 1990s, I thought mental health was about “people going crazy”. As a teenager, I thought therapy was for “people in danger of suicide”. As an adult, it was for “basically anyone who has it worse than me.”

After all, I was an intelligent person from a stable family who went to a good school and got a maths degree at university. Sure, being an unemployed teacher sucked, and having undiagnosed Asperger Syndrome sucked (I was in a bad place with accepting my own autism), but therapy was for people from more difficult backgrounds.

Eventually I recognised my needs, and got the help I needed.

I left teaching in 2014, started Autistic Not Weird (and its Facebook page) in 2015, became a published author in 2016, became an award-winning writer in 2017, and as of two weeks ago (April 2018) I’m no longer just a nationwide speaker – I’m an international one. [All links open in new windows.] It’s a nice story to rub in the face of my younger self who compulsively believed he was a failure.

But speaking at Sydney Opera House didn’t cure my anxiety. It was just an awesome achievement to whack my anxiety around the face with. My issues remains to this day, but I’m fighting a bloody good fight. (As a side note for those who are curious, here’s how I fight.)

This year, it took a literal roomful of therapists to convince me I needed therapy again.

A little context: I have two jobs- I’m a tutor for autistic teenagers who are outside the traditional education system, and I write for Autistic Not Weird part-time thanks to my Patreon supporters). Both these jobs mean talking to very vulnerable people, who have often had horrible life experiences and are left with extremely sensitive issues. (Leading an online community inevitably leads to difficult interactions too… like the person who sent me a video of a man killing himself, as punishment for me taking three days to respond to a message they sent on Christmas Eve.)

Having Asperger Syndrome – and my own mental health issues – makes me the ideal person for both of these jobs. It also means I find them tougher. And once in a while, the pressure gets to me.

Last year I arrived at a family event after a three-hour drive, and rushed straight inside without taking time to relax. This meant that a tiny misunderstanding turned into something enormous in my head. (It was something to do with eating food that was going to be put out for a party, even though I’d just watched someone else do the same thing and also made the journey without any breakfast.) Technically nothing big, but autism and anxiety amplify everything.

So there I was, post-disagreement, stood in the kitchen trying to breathe, with my brain and mouth shutting down- and someone stood next to me saying “no Chris, tell me what’s wrong.”

I imagine it felt similar to how a barely-verbal autistic child feels when an adult sees them mid-meltdown and their only advice is “use your words”.

(Allow me to explain something about verbal ability and stress, by the way. Thinking of words and saying words are two different arts. Thinking of a sentence is like designing a bridge you want to build, and saying the words is like constructing that bridge. You hope and pray that the bridge that you build matches the one you planned. But, no matter how fluently the sentence gets formed in my head, the ability to turn thoughts into words gets lost when my brain gets overwhelmed. It’s like I lose the ability to follow my own brain’s instructions, and instead of speaking a whole fluent sentence I’m spluttering individual words – plucking out individual bricks as they float down the stream I was supposed to build a bridge over.)

With all this in mind, I had the perfect response to the question “no Chris, tell me what’s wrong.” If I’d had the words at the time (and if it hadn’t been a family event) I probably would have said:

“What’s wrong? How about mental bloody health issues? You know, the ones I pretend I don’t have! The ones I trick myself into thinking don’t exist because I’m too busy dealing with everyone else’s! I’m so consumed with the crap that my friends deal with, that my students deal with, that my godchildren deal with and what people on the internet are dealing with, that I don’t even bother checking how well I’m doing, and every so often I pay the price for it!”

Despite the odds, I found some time to myself, found my footing again (thanks to opportunities to stay away from the crowd), and actually enjoyed the event. And later that day, if you’d have asked me if I needed therapy, I’d have said no. It’s for people worse off than me.

Like the header says, my mind wasn’t changed until I delivered a workshop to a roomful of therapists in Glasgow. Questions were running dry during the closing Q&A session, and I realised how rarely I ever get the chance to talk to a load of mental health professionals. So I asked them questions in return, mainly about how to help those with sensitive issues.

Long story short, the group consensus was “Chris, if you’re helping others you need to help yourself too. Find a professional to chat with so you don’t damage yourself in your job. It’s what we’re told to do.”

Not long later, I started therapy again. And I’m glad I did.

But it turns out I’m not alone.

I wrote some of the above points with specific people in mind. Some of those people have told me they considered suicide. Some of them have tried to take their own life. And tragically, some of them are now dead.

Believe me – if someone believes they don’t have the right to seek help, things get dangerous.

And let’s not forget those with more ‘understandable’ mental health issues, who work with bosses and colleagues whose patience won’t last forever. I was unfortunate enough to work in a special school when it was mid-collapse due to money issues, and it became a horrible place to work because every decision became about costs rather than vulnerable students. A significant portion of staff took time off for mental health reasons – hell, I had to take a week off too – but I witnessed staff members being subtly critical of those on long-term sickness who had received three months of pay without doing three months of work.

If you match any of the above bullet-points (or any I missed), here’s some advice:

1. Don’t compare yourself to others.

One of my biggest reasons for not seeking therapy was because other people had ‘real’ struggles. Professional help was for people who had it worse than me.

Then my mental health started to deteriorate. And even then, help was still for people who had it worse than me.

True, other people have lost loved ones. Or gone through bitter divorces. Or abuse. And if they’re not in therapy, they should get some. But getting help isn’t like getting tickets to an exclusive concert. It’s open to all who need it, including you.

And here’s a quote that had quite an impact on me when I first read it. 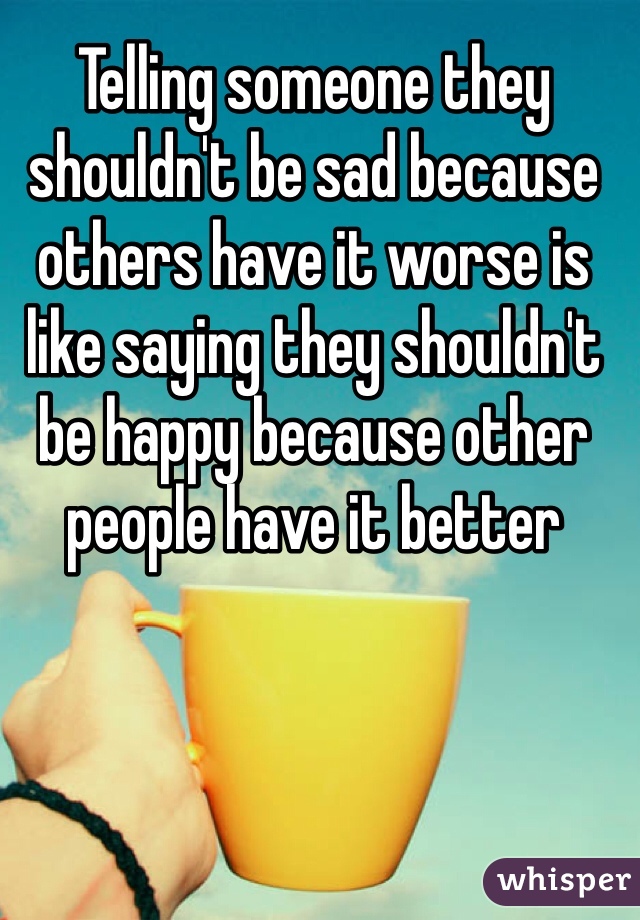 2. Your mental health issues don’t need to be ‘about’ anything.

Bestselling author Matt Haig, who lives with anxiety and writes openly about its challenges, once made this excellent point (and I wish I could find its exact source so I can get the wording right):

“People often ask ‘what’s your anxiety about?’, which to me is completely illogical. Nobody asks ‘what’s your arthritis about?’. Sometimes it just exists. It just is.”

The point is – don’t feel like there needs to be an externally visible ‘thing’ for your issues to count. The validity of your struggles shouldn’t depend on what they look like to other people. They’re not the ones with your brain.

Whenever I need a break from my messages, I feel a little guilty because people send them in the hope of getting help from me. I have to keep telling myself that in the long run I’m helping more people, because I can hardly help them if I’ve overwhelmed to the point of shutdown, and my brain is lagging like a Windows 98 computer trying to run Overwatch.

Think of it as like those oxygen masks on planes – which you’re specifically instructed to place on yourself before helping others. (I was one of those children who got offended when the adults were told to look after themselves before helping me. But in hindsight, they were right! An oxygen-deprived adult trying to help me would have resulted in an unconscious adult and an unconscious child.)

Look after yourself. Then look after others. Your needs exist, they are valid, and you are allowed to have them.

I hope this helps some people, whether you’re autistic or not. For those who want to join Autistic Not Weird’s Facebook community, you’re more than welcome. I also make advice videos on YouTube if that’s your thing. And as I mentioned earlier, I write these articles for a living so if anyone wants to support my work in exchange for rewards and thank-yous, here’s my Patreon page too.