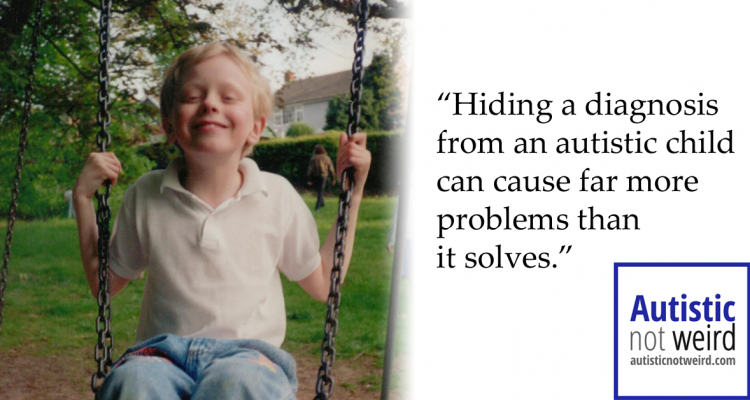 When should I tell my child they’re autistic, and how do I tell them?

The two questions above are among the most commonly asked by parents of newly-diagnosed autistic children. And wouldn’t it be great if there were a one-sentence answer to it?

Sadly, it doesn’t work like that. But here’s my advice, as an autistic man who used to be an autistic child, who gets asked this question a lot.

Full disclosure: this is a rewrite of an article that I wrote five years ago (way back at the start of Autistic Not Weird’s journey – long before its Facebook page reached a six-figure number of followers [all links on ANW open in new tabs] and before my Patreon supporters allowed me to do this for a living), which I have since disowned because I no longer agree with it.

Apparently I wasn’t as autism-positive back then as I was now. But honestly, I believe it’s important to listen to people whose opinions have evolved over the course of several years. Lots of years of reflection have gone into this article, so I hope it helps.

So, the first question – when should you tell a child they’re autistic?

Opinions on this issue range between those who “don’t want my child to have a label” (a very problematic opinion which I’ll address below) to those who think children should be told pretty much on the day of their ultrasound. My opinion is neither.

Four and a half years ago, in the first version of this article, I believed it depended entirely on the individual. I still believe this. What works for one autistic person may not work for another, because (rather inconveniently for everyone else) we’re all different to each other – for the same reason that non-autistic people are.

So, as always with my articles, read the advice and apply it to your own circumstances however you see fit.

What I will say though, is that I used to believe that if a child had a positive level of self-esteem, was happy being different and didn’t need to know about their autism, it was best to leave it until they did. This has changed.

I no longer believe there are good reasons to avoid telling a child about their autism, and I believe that hiding a diagnosis from an autistic child can cause far more problems than it solves. This is, of course, as long as the news is delivered well (more on that later) and as long as the child is emotionally mature enough to understand the explanation.

(Oh, and if the child isn’t emotionally mature enough, it’s a better idea to simplify the autism explanation than avoid explaining it altogether.)

I have three main points I wish to make, followed by a nice Carroll diagram at the end.

1. A quick response to those who “don’t want their child to have a label”.

The word “label” is quickly becoming one of my least favourite words in the English language. (My least favourite of all is “inappropriate”, because it’s never been entirely clear to me what it actually means.)

Seriously, the amount of people whose main reason for not seeking a diagnosis because of this reason – and those who really did want a diagnosis but were discouraged by relatives/friends who used this reasoning – is very disheartening. Sure, there’s a generation of autistic children going through life without an explanation for their struggles, nor services or accommodations to help them with those struggles, but at least they don’t have a “label” whatever the hell that’s supposed to mean.

Except, they do. I’ll let this picture do the talking.

And yes, this picture is more about getting a diagnosis in the first place than not telling a child they’re autistic, but there are parallels here. The autism explanation grants an autistic child the right to not think they’re stupid, or naughty, or lazy, or incapable.

2. Tell your child they’re autistic when it benefits them.

Why is the word “them” italicised? Because it can be easy to fall into the trap of persuading ourselves that it’s the right time (or not the right time) to tell a child based on how it feels for ourselves. This can result in:

Autism can be a tough subject to discuss, especially for those who have yet to make peace with it or understand what it means for a child and their family. But remember that the person who needs to understand autism the best, the most thoroughly and the most positively, is the child themselves.

3. And finally, make sure they’re among the first to know.

I once heard from a parent who was extremely hurt by her son’s school. Since he was struggling and had recently received an autism diagnosis, his teacher thought it would be a good idea to give the whole class an explanation about autism and why he struggles.

Which, in principle, is a good idea. Or would have been, had it been discussed and negotiated with the boy’s family, other staff members, and (most importantly) the boy himself.

But no, this was done before the mother had had any reasonable opportunity to talk to her son about his autism. (Because of course, sometimes it may be appropriate to wait before revealing their diagnosis. If that’s your decision though, bear in mind you’re just not telling them yet.)

Long story short, this boy’s entire class knew about his autism before he did.

As I said in my previous point, in all matters regarding a child’s autism, it is the child who takes priority. And this includes basic information governance, like who gets to find out (beyond those who have literal responsibility for them, of course).

In conclusion, here’s a diagram to illustrate the advantages and disadvantages of each action. Feel free to pick and choose which points are relevant to your situation. (Note that the right hand column does not say “not telling your child”, but rather “delaying telling your child”. Because that’s what it is, realistically speaking.)

Ok, I’ve decided to tell them. But how do I do that?

Before I go further, most of this section is written on the assumption that the parent is having a specific ‘breaking the news’ discussion with their child. But plenty of my friends with autistic children have told me that:

“Well autism’s never really been a secret in this house. We’ve always talked about it openly so our child learned about it early and has just always accepted it.”

If that works for you, use that.

As for how to ‘break the news’? Two important words: make it positive, and make it personal.

Why positive? Because the first thing anyone learns about autism is that it’s “supposed to be a bad thing”. (I personally disagree, but then again I’m only a real-life autistic person and a tutor for autistic students, with personal and professional experience of autism ranging from academic high-flyers to those with profound disabilities, including 34 years of having an autistic brain myself, so what do I know?)

So with that in mind, being cuddled up to your child in tears apologising for this demon that’s taken over their body is not likely to help them grow up with a positive self-esteem.

Of course, don’t fake the positivity. Because (leaving aside the fact that your child will probably sense the insincerity) there really are positives with regards to autism that don’t need faking. Equally don’t fake the lack of struggles either: as I often say, true autism awareness means being open and honest about the negatives but not letting them dominate the discussion.

And secondly, make it personal.

Your child will be far less likely to positively accept (or even understand) what their autism means if it’s described as a cold, tick-box list style of symptoms, or like a metaphorical box they’re supposed to fit their identity into.

For each autistic trait they have, find a personal example of how it applies to them. For example,

“You know how you’re an expert on keeping facts in your head, but you find your teacher’s hints difficult? It’s because your brain processes things differently.”

“This may explain why you find bright lights and loud noises difficult to cope with, but also why you’re so creative.”

Thinking of real-life incidents and memories can help too, e.g.

“Sometimes it can be difficult to know how somebody else is feeling- remember the time when I shouted to you because you were far away, and you thought I was shouting because I was angry with you?”

And a few extra bullet-points:

Of course, take as much insight from this article and ignore as much as you want, depending on the particular needs of your child. The absolute best way of talking to your child about autism is meeting their own individual personality, and you will be the one who best knows how to do that.

I hope this article helps those who read it: again, I felt it important to rewrite it on the back of four and a half years of reflection on what it means to be autistic and how positively our identities deserve to be approached.

Take care, and all the best to you and your child when the conversation comes.