If you’re anything like me- particularly the bit about being on the autism spectrum- you may have trouble getting hints. You may prefer (and even naturally expect) people to:

Unfortunately, the general population has a peculiar tradition of using words that don’t match their thoughts. Sometimes they are even known to say the complete opposite of what they mean (even in a non-sarcastic sense), with the expectation on us to interpret the thoughts in their head, rather than the words from their mouth.

But worry no more! Today I bring you a short translation project, which should help some of you navigate the (figurative) waters of people’s non-literal words. 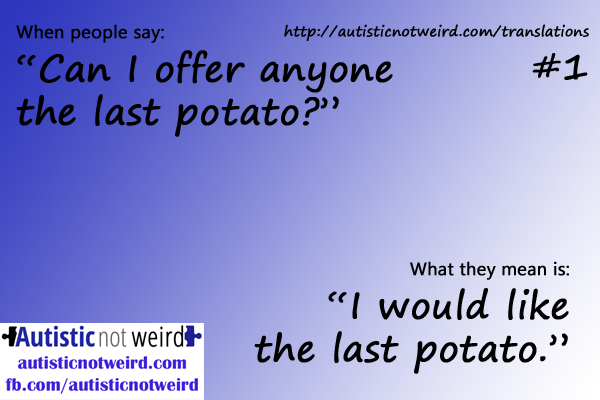 2019 edit– important note about #26. In the time this article’s been up, a few followers have kindly given me some insight into why this question is asked. Often it’s about reassurance rather than a literal question- the person wearing the dress may believe it looks pretty enough, but feel nervous about what everyone else is going to think. Reassurance from a second person often gives them the confidence they need to wear it comfortably in public.

No doubt there are a hundred more little hints that I missed. Feel free to share them in the comments!

Are you tired of characters with special needs being tokenised and based on stereotypes, or being the victims rather than the heroes? This novel may interest you!

Underdogs, a near-future dystopia novel where the heroes are teenagers with special needs, is soon to be released through Unbound Publishing. A character-driven war story which pitches twelve people against an army of millions, it balances intense action with a deeply developed neurodiverse cast.

Pre-order link for the already-commissioned sequel!

This site uses Akismet to reduce spam. Learn how your comment data is processed.

More in Autism/Asperger's, Everything

How I put anxiety in its place

This article’s been a long time coming. And it’s not just for autistic people.   When I wrote the growing...