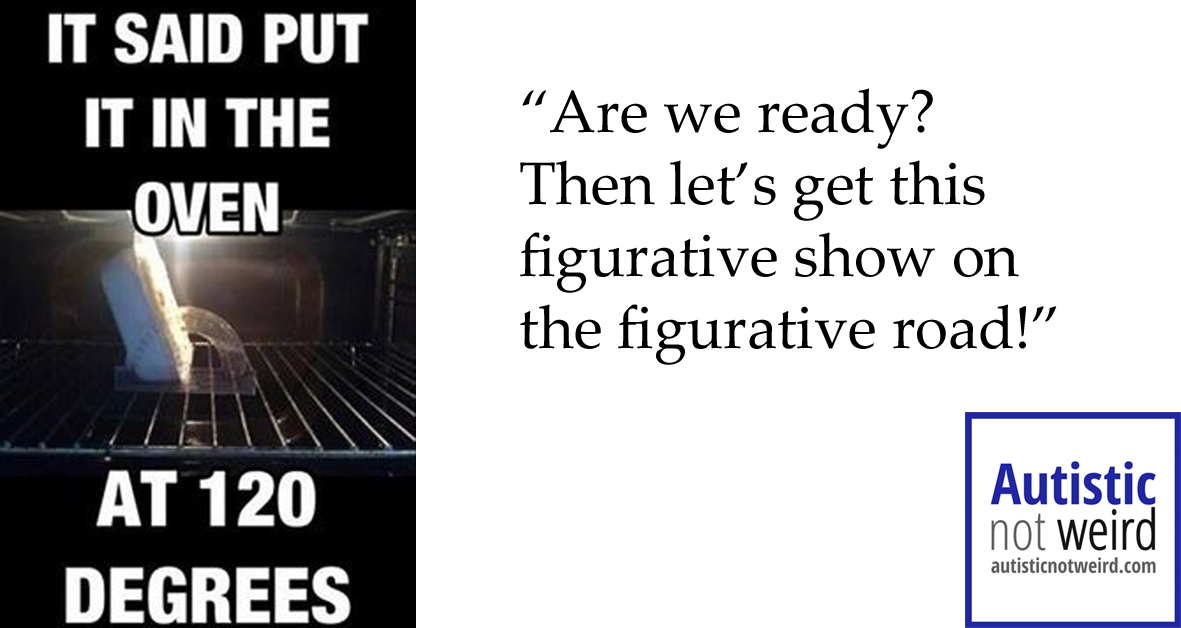 Provocative title, I know. But we hear so many sad stories about how tragic it is to live with autism or with autistic relatives. It’s time to share some funny stories. Autism’s not all hurt and pain, and I don’t care if Autism Speaks claims otherwise.

Besides, speaking as a man with Asperger’s who pathologically sees other people’s words as literal, I’ve got to be honest. It can be really funny at times.

Here are my top ten examples of autistic people taking others literally. I’ve been personally involved in half of them, and the ‘perpetrator’ of three of them.

Are we ready? Then let’s get this figurative show on the figurative road!

I was sat in a restaurant, having just decided what to have for pudding (it’s what we call dessert over here). The waiter came along, and I told him I wanted the apple pie. He then asked me, with no intonation in his voice (which was surprisingly important):

“Would you like cream, ice cream or custard with that?”

And in my daydreamy state, I replied:

…Well, duh. I did want cream, ice cream or custard. But my answer made me look just a little bit stoopid.

The sad thing is, it’s not even the only time it’s happened! I once ordered a meal and was asked whether I wanted French fries or salad with it.

This time I was with a teenage lad who needed help walking into town. So we walked together down the street, and the time came to cross the road. I said, clearly and slowly:

“We need to be careful now. There might be cars. You need to look at the road.”

So he dipped his head, and stared right down at the tarmac in front of his feet. He looked at the road, exactly like I’d told him to.

A teacher friend of mine took a class on a trip somewhere. I don’t know where it was, but they took a load of clipboards. And when the time came to hand them out, every child ended up with a clipboard except for the mildly autistic lad.

He went to the teacher and asked what he was supposed to do.

And the teacher replied, without thinking it through:

“Oh, just write on someone’s back.”

So he wrote on someone’s back.

I’ve already done an article about idioms. With one of them, I didn’t even realise it was an idiom at all until a six-year-old boy pointed it out to me.

Me: “Could you quickly walk through that door and ask Mrs Jones for more pencils?”

Him (looking confused): “…How do you walk through a door?”

This one involves an eight-year-old lad who had cheese tortillas every evening. Of course, cheese gets hot pretty quickly, so his mother always had to check they were cool enough to eat. One evening:

As the son came into the room, mum touched a tortilla to her lips and discovered they were actually still too hot.

Her son approached in confused silence, and scratched the tortillas.

(Important note for American readers- British people don’t say ‘going to the bathroom’- we say ‘going to the toilet’. As a result, we sometimes call the ‘bathroom’ the ‘toilet’. Yes, we name the whole room after one object inside it.)

A friend of mine was dealing with several students at once, when a girl came up to her with really mucky hands. With half a dozen distractions, she said the fatal line…

“Oh, just quickly wash your hands in the toilet.”

Guess what the girl did?

I never was much of a romantic. I’ve averaged one girlfriend every ten years.

For my first date with this girl at the age of 17, we went to the village for a pub lunch.

Now, my girlfriend had this rather traditional idea that I should pay for the both of them, because I was the man. And of course, if she’d have actually asked I probably would have paid. Except, she didn’t ask. She simply said:

“Hmm… I’m not sure if I have enough money for food and the bus home.”

Which I now understand to be girl talk for “please pay for my food”. But me, not knowing any better, gave a totally valid answer.

She was not happy.

Not that I found out for a few years, but she wasn’t happy.

Having spent the day teaching her son prepositions (in, on, around etc.), a mother had to take him somewhere that evening. As is often the case when you have to drag children somewhere, they were running late.

The son rested his shoes right on top of his feet, looked up at his mother and grinned.

A friend of mine once helped a child who struggled with his temper: a boy who had been known to get into scuffles simply out of frustration. She gave him some pretty sound advice.

“Take a moment to relax when people annoy you. Before you get angry and hit anyone, count calmly to ten.”

So next time a child annoyed him, he counted to ten before he hit them.

To be fair, he probably thought he was giving them a good head start!

When I was eleven, I was posed this maths question.

Will the frog ever reach the pond? Give reasons for your answer.”

In case you need it, I’ll give a long paragraph break before telling you the answer.

Mathematically, the frog will never reach the pond. In order to reach the finish line, there would have to be a day when the frog goes the whole way. And if the frog only ever goes halfway, that will never happen.

I got the answer half right. This is what I wrote:

Will the frog ever reach the pond?

Give reasons for your answer.

Frogs are amphibians, and if they go for three days without water their skin will dry up and they will die.

Which is entirely true! I got the answer even more correct than the so-called correct answer, and I still lost a mark!

Eighteen years later, it still bugs me to this day. The lesson learned was this: whenever you’re answering a test question, don’t give the correct answer. Give the expected answer. Only then do you get the mark.

Please share your own funny examples below! Autism is not always the painful journey it gets painted to be, so feel free to share your funniest moments. 🙂

I spent the next couple of seconds genuinely thinking her son had a terminal illness. I worked out the truth too late, so I was already wearing my honest sympathetic face. Oops.