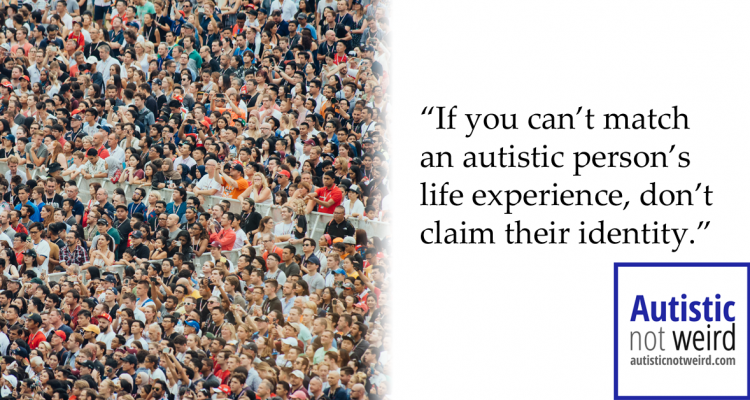 We need to stop saying “we’re all a little autistic”

A few years ago, I was the only diagnosed autistic staff member in a special school. The rest of the staff weren’t autistic, but many jokingly claimed to be.

“Oh, that must be my autism,” some would say as they parked their car in the same space each morning. (Meanwhile, I just parked wherever was easiest.)

“Yep, that’s my autism right there,” others would say as they tidied up the staff room in a very specific manner. (Meanwhile, the messiness of my desk was repeatedly criticised throughout my teaching career.)

Don’t get me wrong, I was close friends with a lot of these colleagues. But were it not for the anxiety I suffered at the time, I probably would have challenged those remarks.

Autistic habits are surprisingly easy to pick up in a special school, since you’re constantly adapting your behaviour to suit your students’ needs. But next time you want to show off your ‘autistic traits’ because you didn’t realise your friend was being sarcastic, first go through the years of social isolation, the lifetime of not fitting in, the confusion of people’s comfort zones, the feeling of being the ‘wrong’ kind of person for not being like everyone else, and the years of having anxiety forced upon you by others. Then you can talk to me about ‘your autism’.

Excuse me. I needed that rant.

Having been in the online autism community for quite a while now (at time of writing, Autistic Not Weird’s own Facebook community has over 66,000 followers [all links open in new windows]), I’ve noticed that one of the biggest frustrations among autistic people is the following question:

“Aren’t we all on the spectrum somewhere?”

Well, the answer depends on whether you’re asking a neurologist, or someone with real-life experience of autism. (I’m a big fan of balanced opinions, so it may be best to ask an autistic neurologist. I imagine there’s plenty of them.)

The neurological theory is that, because autism is a spectrum, it can be argued that everybody is somewhere on it, even if 99% of them don’t fall within the diagnostic criteria.

The autistic perspective is… well, a resounding NO. If you can’t match an autistic person’s life experience, don’t claim their identity.

Because even if the phrase “everyone’s on the autism spectrum” were technically true, it’s very, very misleading.

The fact is, people may hear ‘everyone’s on the spectrum somewhere’, and interpret it as ‘everyone’s a little autistic’. Those are two entirely different things. Everyone can technically be on the autism spectrum (in the same way that almost-but-not-quite-pitch-black is technically on the visible light spectrum). But not everyone can be autistic, because the word ‘autistic’ implies that they could literally be diagnosed with autism.

How to belittle an autistic person without even trying:

Let’s assume that everyone truly is, neurologically speaking, on the autism spectrum. Even if this is true, the sentence “we’re all a little autistic” remains both damaging and misleading. (Just like the millions of people who say “oh, I’m super OCD about some things!” whilst displaying no genuine traits of real-life Obsessive Compulsive Disorder beyond hating that smudge on their bedroom window.)

When you tell an autistic person that “we’re all a little autistic”, I can almost guarantee that their first reaction will be to feel like you’re trivialising their difficulties (and I’m sorry to say it, but they’re basically right. Taking struggles specific to one group of people, then claiming they apply to humans in general, is literally what trivialising means.)

While I’m at it, here are a few other sentences that are socially unacceptable. (Admittedly, I’ve borrowed some from a previous article of mine: “You have autism? Oh, I’m so sorry.”)

“You have a nut allergy? Yeah, I don’t like nuts either.”

“You’re dyslexic? Well most of us can’t even spell that word so we know how you feel.”

“You have Alzheimer’s? Don’t worry, we all forget things as we get older.”

“You suffer from depression? Well we all feel down from time to time.”

Oh, wait. People actually do say that last one.

When I last raised the “we’re all a little autistic” subject in Autistic Not Weird’s Facebook community, several followers told me about psychiatrists using the sentence as grounds to deny someone a diagnosis (or at least make one more difficult).

My response would be “yeah, but aren’t we all psychiatrists in some way? I mean, we all have brains, we’ve all learned about them in school, and we’re all fascinated in how they work. I’m sure that makes my experience at least partly as valid as yours.”

To be fair though…

Not everyone says “we’re all on the spectrum” to belittle or trivialise. Some say it with the best intentions, almost as a way of saying “don’t worry, you’re not alone”.

But there are better ways of telling someone they’re not alone, rather than falsely claiming to know what they’re going through. Or implying that everyone who ignores them, alienates them, or openly taunts them is ‘autistic’ too. Or making them think there’s no way the general population can ever come to understand them… because if they’re all autistic and still don’t understand, they never will.

If you want an autistic person to feel less alone, don’t use a misleading statement that means “we’re all just like you”, when all our life experience tells us it’s simply not true. Instead, ask them for their perspective, and listen attentively to it. Listeners kill loneliness.

And to anyone who’s still not convinced, may I present my final case.

If everyone were ‘a little autistic’, autism-friendly cinema screenings would not be a new thing.

If everyone were ‘a little autistic’, shopping centres wouldn’t be so terrifying.

If everyone were ‘a little autistic’, the unwritten social rules would be clearer. Maybe they’d even be written down.

If everyone were ‘a little autistic’, schools would already know how to cater for an autistic child’s needs, without requiring specific autism training that their budget can’t afford.

If everyone were ‘a little autistic’, rates of anxiety and mental health issues would go through the roof.

If everyone were ‘a little autistic’, society would be driven more by ‘right and wrong’ than ‘appropriate and inappropriate’.

If everyone were ‘a little autistic’, automatic hand-dryers would be banned in public places.

If everyone were ‘a little autistic’, fashion designers would be more concerned about how soft and comfortable their clothes are than whether or not they look fashionable. (Oh, and labels would never be allowed to stab people in the neck.)

If everyone were ‘a little autistic’, people like me would pass job interviews.

If everyone were ‘a little autistic’, people would actually say what they mean, rather than drop subtle hints then blame us for not correctly interpreting the inside of their heads.

If everyone were ‘a little autistic’, my career as an autism trainer wouldn’t need to exist.

If everyone were ‘a little autistic’, diagnosed schoolkids wouldn’t be bullied for it.

If everyone were ‘a little autistic’, several of my students would never have attempted suicide due to the isolation they felt from the rest of society.

And finally, if everyone were ‘a little autistic’, people would understand our social differences rather than try to “solve” them.

Well, that’s all from me for this article. Next time you hear someone using the sentence “we’re all a little autistic”, feel free to steal any of the above sentences. Use all of them at once if you want, although this may freak out your conversation partner.

Thanks for reading, and feel free to join us on Facebook or take a look at the new series of 3-Minute Autism Advice videos I’m sharing on YouTube. And if anyone wants to help me continue to write for Autistic Not Weird as a job, take a look at the rewards available on Patreon!

Cover photo by CHUTTERSNAP on Unsplash