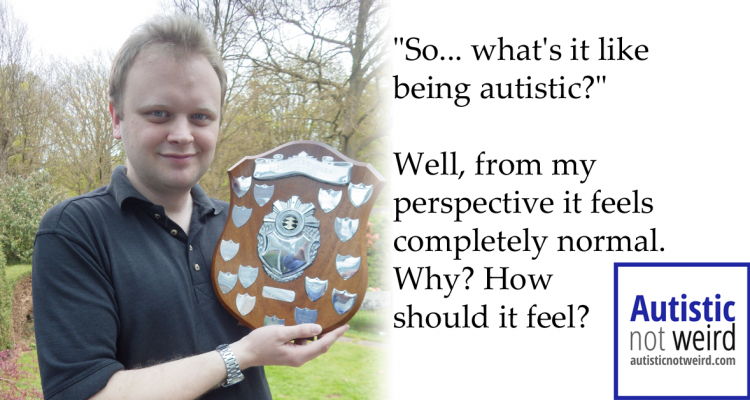 [This was one of the very first things I wrote for Autistic Not Weird, in April 2015, right when I was new to autism advocacy. I’m keeping it here, unchanged, as a nice thing to look back on. That, and because I meant every word at the time and it represents how I felt about autism when I first went public with it. (Oh, and language choices should be seen in the context of how it was widely used in 2015.) Enjoy!]

It’s a question I get asked once in a while. Sometimes it’s a silent question because people think it’s rude to ask, but even I can tell they’re curious.

Well, from my perspective it feels completely normal. Why? How should it feel?

I can only describe this from my own point of view. So, to those reading this who are not on the spectrum, please don’t make the mistake of assuming this applies to everyone. And, to those who are on the spectrum, don’t be surprised if not all of this applies to you (although you may find there’s more common ground between you and other autistic people than you think).

There are bad points and good points. I’ll leave the good bits until last.

Having Asperger’s means that everybody else is really weird, but somehow they have the nerve to tell you that you’re the odd one out.

It means appearing silent in group conversations because of that extra split-second it takes to form the sentence in your brain, during which somebody else has spoken up.

It means missing out on subtleties, not catching on to inside jokes, and people eventually saying “ah, never mind,” when you ask what’s so funny.

It means people thinking you’re uninterested in them because you’re not looking at their face.
It means you alienate people for no obvious reason.

Having autism in the 90s meant growing up believing you were the weird kid. It meant professional psychologists writing down “slightly odd personality” in their reports. (Yep, that actually happened when I was ten.) It meant that my social skills were only lacking because of my own immaturity. After all, if I could read, write and do sums, how on Earth could I be socially inept unless I chose it?

Having autism means being the 1% that’s different. (I mean it literally. 1% of the general population is on the spectrum.)

It means being in a group where 81% of you aren’t in full-time employment.

It means a 70% chance of having another neurological condition too.

Having autism means being relentlessly focussed on the things you love.

It means having the right mindset to solve a great big maths problem, or wipe the floor with someone at chess. It means you get to experience the absolute joy of being a geek for beautiful things, and it’s wired into you from Day One of your life.

It means seeing things with ruthless logic, and being able to spot the weirdness in society that some people take for granted. (For example, who the hell decided that tying something around your neck made you look smart for an interview? Do people really think less of you if you don’t walk into the interview wearing a noose? And if there’s just one potato left, what’s the point in letting it go to waste just to pretend you’re being polite?)

It means never, ever forgetting people’s birthdays. Occasionally, it means remembering what happened on 23rd January 2002. (That was a Wednesday, by the way.)

It means your family sees you as the unquestionable authority on what happened and when, since nobody can dispute your memory.

It means you can memorise pi to dozens of decimal places without any particular technique (I once knew it to 50, but I can only remember 31 right now). More importantly, it means you enjoy it!

Some days I go to bed and thank the Lord for giving me Asperger’s. Other nights I go to bed wondering what the hell He was playing at. But let’s just say that every time I come up against a maths problem or sit down at a chessboard, I feel just a little bit thankful for being the weird kid.

Autistic people walk among you. We’re roughly 1 in every 100. We don’t all suffer severely. We don’t all rely hopelessly on repetition and routine. We don’t all hate being touched or hugged. We don’t all rock back and forth mumbling the same sentences again and again. Some of us are high-functioning, non-disabled, clever and friendly social creatures, who just seem “weird” to the people who decided what normal is like.

Besides, I get to see the world from a different angle. And despite the occasional social difficulty, my angle is awesome.