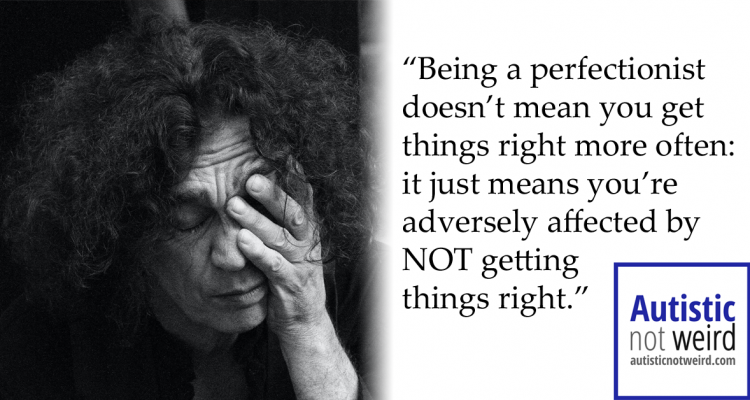 There’s something falsely positive about the word “perfectionist”, isn’t there?

The first time I remember hearing the word, I was being taught how to answer job interview questions. I was told that when the interviewer asks me what my biggest weakness is, I should say “oh, I’m a perfectionist, I can’t leave things alone until I know they’re right”. Because apparently, it’s like answering a question about weaknesses by continuing to show off my strengths.

(I never did this, by the way. Partly because it was a lie, and partly because I knew the interviewer would be experienced enough to have heard this answer far too often. And partly because of the sneaky follow-up question: “ok, can you think of an example when this has been a big obstacle for you?”)

But these days, I know that perfectionism can actually be a huge and debilitating problem, not least for autistic people like myself. And I’ve seen it impact a wide range of people, including my friends and several students I’ve worked with over the years. It impacts their self-esteem, their self-worth, their emotional regulation… and ironically, their ability to get things right.

The problem with perfectionism

Despite its falsely positive reputation, perfectionism isn’t all it’s cracked up to be. Being a perfectionist doesn’t mean you get things right more often: it just means you’re adversely affected by not getting things right.

At church last week, a friend of mine discussed a book which talked about a similar idea: that the more obsessively you want something (wealth and riches, YouTube subscribers, sick abs, whatever) the sadder you feel. You could end up being twice as rich as the guy next door, with ten times as many subscribers and the most superhuman pectorals within a fifty mile radius, but you’ll only be able to focus on the stuff you haven’t yet attained. Strangely enough, that poorer neighbour of yours is likely to end up happier.

That right there, is just like perfectionism. Someone who scores 98% on an exam might be far sadder than the person who got 80%, depending on whether their focus is on the 98% they got or the 2% they didn’t.

(The book, by the way, is called The Antidote: Happiness for People Who Can’t Stand Positive Thinking by Oliver Burkeman [all links on Autistic Not Weird open in new tabs]. I’ve not read it personally but it’s been recommended to me.)

I get it, of course. I’m almost never, ever up to date with my emails or messages through Autistic Not Weird’s Facebook page, and having one outstanding message left often feels worse than having forty. Earlier today it took me longer than 30 seconds to solve my Rubik’s cube, and I was extremely annoyed. I was ignoring the fact that two months ago that kind of result would have been incredible for me.

I also know teenagers who start a new story, and after one page they delete everything and spend the rest of the day telling themselves how terrible they are at writing. Because in their minds, everything needs to be as good as they can make it, as soon as they do it. (As a twice-published novelist, I can assure you that first drafts are supposed to be crap, but more on that later.)

When it comes down to it, perfectionism can be described almost as an obsessive-compulsive habit. Obsessive compulsion, of course, being misunderstood by the public too. The same people who claim that “perfectionism” is a good thing are often the same people who falsely claim to have what I call Faux-C-D.

Why imperfection is tolerable (and sometimes essential)

When I was at school, maths was my favourite subject. Later in life, my first university degree was in Mathematics with Education. And there was something very simple that I adored about it.

I could get objectively correct, perfect answers.

With English, art, music and so on, it was all a matter of opinion. Even in fact-based topics such as science or geography, there were better and worse ways of expressing what you know to be right. Mathematics was the only place in the universe where you could just write down a correct answer.

Some years later, I did a Masters degree in creative writing. I may have been writing stories since I was a teenager and was skilled enough to pass with a distinction, but I wonder what the 18-year-old me would have thought to me studying a subject that relied so much on opinions rather than facts.

But honestly, maybe my skills as a writer became so much better once perfectionism stopped being my focus. Maths demanded perfection, but writing demands beauty. And when you’re focusing on making something beautiful rather than making it correct, you can do whatever the hell you want. The freedom is incredible.

So here I am now at the age of 34, teaching maths and creative writing to teenagers. Guess which one I enjoy teaching more?

One day I’m sure I’ll write a full article about writing advice, but here’s what I have with regards to perfectionism. (All of this applies to art, music, video-editing and so on.)

How I handle perfectionism

Going back to perfecionism in the general sense, this is the advice I would give to those of us afflicted by it:

1. Remember what other people’s expectations actually are.

Do you think other people around you are expecting perfection?

Do you think they even strive for perfection themselves?

I don’t know about you, but for me the pressure of other people’s expectations has a huge impact on my performance. Occasionally it can be positive: if I know students are relying on my lessons being good or that people might be helped by my articles, I plan them better. But it can be extremely negative as well, and I end up focusing relentlessly on the tiny details in order to satisfy other people (who ironically are unlikely to even notice those tiny details).

Other people don’t score 100% on everything either. And if their expectations are less than perfection, maybe you shouldn’t be pressuring yourself too much.

2. Stop seeing imperfections as “giving up”, or compromising on quality.

Seriously, it is neither. There comes a point when tolerating imperfections becomes looking after yourself. And the less you look after yourself, the worse your stuff will be anyway. So put yourself first and your work second.

3. Learn how to tell when enough is enough.

If I truly, truly wanted this article to be a masterpiece of absolute perfection, I’d still be working on it five years from now. Even Leonardo da Vinci knew to stop at some point. If he didn’t, his skeleton would still be suspended next to an unfinished painting of the Last Supper.

4) Imperfections can actually make things better, believe it or not

Before I was born, my grandfather made a wooden chair. It’s been in the family ever since, and is in my house right now.

It’s really interesting to look at. You can see the tiny little imperfections that you don’t get in factory-produced chairs. They aren’t mistakes by any stretch, just little asymmetrical bits that reveal that a real-life human made it with his own hands. And it’s all the more amazing for it.

5) Finally, there are several different ways of getting something right.

Funnily enough, this goes for mathematics as well. But what I mean is there’s usually no single sure-fire way to perfection.

For example, during my time as a primary school teacher, I saw a great many different type of handwriting styles. There were some styles that were obviously better, and others that were obviously worse. The main objective of handwriting is to communicate what the words are saying. And among the styles that were good, I saw a vast range of different ways of doing good handwriting. I could line up five different pieces of work with beautiful, legible handwriting, and all five of them would look entirely different. But they all worked. (I mean think about it, that’s why we have so many fonts.)

There are multiple ways to get things right. And there should be.

Oh, and in case you’re wondering, the misspelling of “perfectionism” at the beginning of that list was deliberate. Because screw it, writing doesn’t need to be perfect. So there.

If perfectionism is a big thing for you, I hope this article has helped. And in closing, of course, you’re more than welcome to join Autistic Not Weird’s Facebook community. And for those who feel my work is worth supporting, here’s a link to my Patreon page which allows me to do this for a living. Feel free to take a look at what rewards and thank you gifts stand out for you.