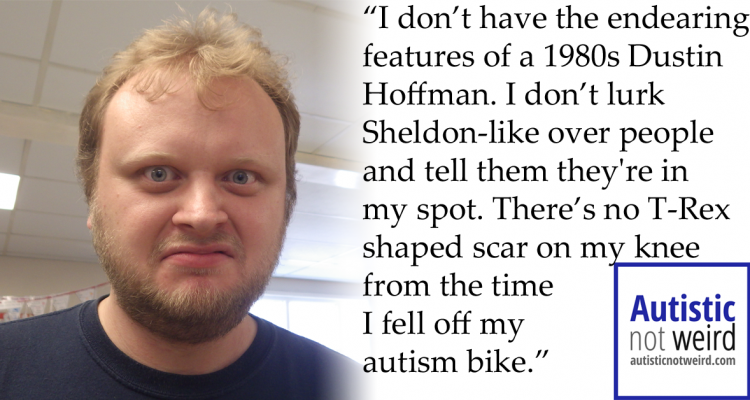 I’m ever so sorry. I really DON’T look autistic.

*DANGER- this article contains enormous doses of sarcasm, irony, and may contain nuts.*

I know we’re not supposed to judge people by their appearances. But people tend to make exceptions for autistic people. I know this because whenever you tell me I “don’t look autistic”, what you’re saying is I’m not matching your expectations of what an autistic person is supposed to look like.

And I know I’m baffling those expectations in daring to look like a regular human (although with a slightly longer nose than the general population), but as I grew up, I found myself unable to look like the bog-standard, average, regular autistic person.

So I’d like to apologise to you now, and confess to you that I really don’t look autistic.

I was born without the standard autistic features such as:

I was not born with nerdy thick-rimmed glasses biologically fixed to my face. I didn’t even need to be born with a calculator in my shirt pocket.

I do not have the endearing features of a 1980s Dustin Hoffman. Nor do I carry around cocktail sticks to show off my epic mad skills at parties.

I do not have “tantrums” in the supermarket to give other people practise at perfecting their judgey-faces, while ignoring the fact that the person experiencing the meltdown may be in immense mental pain. (I do a good enough job of keeping my anxieties on the inside, so the general public don’t have to be inconvenienced by them.)

I do not have The Rules For Everything tattooed onto my chest so I can rip off my shirt and correct people when they break them.

I do not lurk awkwardly over people then tell them they’re in my spot. (Except that guy in the blue van who keeps parking right outside my house. You actually are in my spot. And if you’re reading this, kindly remove your vehicle from outside number 29.)

There is no scar on my knee in the shape of a Tyrannosaurus Rex from the time I fell off my autism bike. There is no Sonic the Hedgehog-shaped birthmark on my autistic backside or any physical sign of my ‘special interests’.

And despite my greatest efforts to avoid eye contact, social training has taught me that it’s painful but necessary. (I’ve known plenty of adults who have been refused an autism diagnosis, as punishment for making eye contact with the doctor.)

I know you probably mean it as a compliment. Because, of course, looking normal is something that all autistic people should aspire to!

But funnily enough, I don’t share that sentiment. I don’t see it as a compliment when someone comes up to me and effectively says “I’m impressed you don’t look worse than you do!”

Or when someone says “you don’t look autistic” in a dismissive voice, as a way of saying “you’re not severe enough to count… or for me to respect your hidden needs.”

(Incidentally, for a quick guide for what to say and not say to an autistic person, feel free to read this. [All links open in new windows.])

Should I communicate through elaborate words or through signing? (And why can’t the stereotype be armpit-farting? I’d be pretty proficient at that. Heck, I can even eyeball-fart. I did it in front of an audience at a talk in Cardiff once.)

But regardless, I suppose there is one way in which I absolutely do look autistic. After all, I share every single physical outward-appearance-affecting trait that autism causes.

All zero of them.

And maybe that’s a good thing.

After all, if I had really distinctive features like those extra three fingers, people’s first thought upon seeing me would be “bloody hell, what happened to that guy’s hands?”

But since I have no physical features relating to my Asperger’s, people’s reactions are closer to “wow, that guy’s beard is sexy. …His nose is a bit long though.”

However, autism’s lack of visibility does make things tricky. The invisibility may have its advantages (beyond people noticing your sexy beard), but if the autism community truly wanted it to be 100% invisible, shirts like these wouldn’t be selling like hot cakes.

Let’s take Down’s Syndrome, for example. The advantage of your condition having visible features is that people see your needs immediately. The disadvantage is that people often see the Down’s Syndrome before seeing the person. With autism it’s the other way round: people will usually see the person before the autism (even if only in the literal sense), but their needs will often be ignored.

It’s very difficult: wanting your condition to be known and understood, without it becoming the defining thing people see about you. Autistic people don’t want to have to wear a shirt to make their needs visible, but they also don’t want it overlooked.

What we need- and what those with Down’s Syndrome need- is for people to recognise our difficulties, at the same time as seeing us as legitimate people outside of our difficulties.

(And I really can’t believe I just had to write that sentence. Shouldn’t it be a little obvious?)

But in the meantime, there’s no such thing as “looking autistic”.

There is no autistic disguise I wear when I deliver my talks. Although I do wear a suit to disguise myself as someone who thinks suits are important. And I don’t finish these talks by riding my autism unicorn into the sunset under an infinity-symbol shaped rainbow. (Seriously though, that would be an awesome way to exit the stage.)

150 autistic kids I know just made a book to help other autistic kids feel less alone. They don’t look autistic either. And nor do any of the tens of thousands of people in our Facebook community.

If you want to see someone who looks autistic, I can’t help you. And if you want to know how to identify a guy with Asperger’s just by looking, you may have to wait a few thousand years for us to evolve those extra fingers.

However, if you seek to learn about autism by listening to someone, I’m your guy.

I’m serious- engage me in conversation, and you’ll learn more about Asperger’s than in a whole day of staring at me and trying to gauge my autism levels. And I’m very happy to teach people.

Don’t look at our faces and expect a short-cut to understanding autism. Listen to us instead.