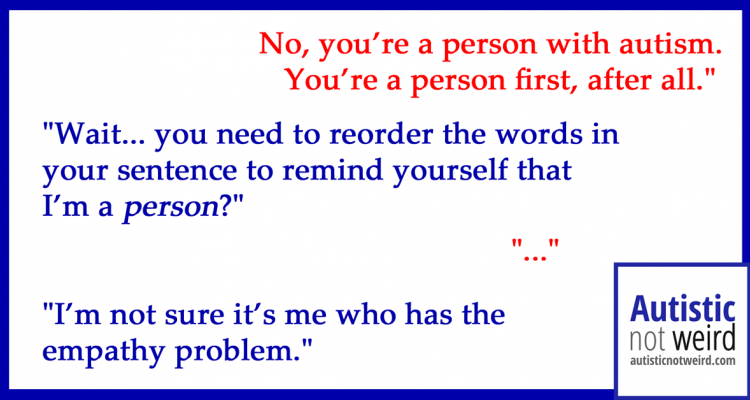 To everyone who tells me not to say “autistic person”

This is going to be one of my shorter articles – largely, I imagine, to be posted in reply to those who “correct” my language when I refer to myself or others as autistic, as opposed to “having autism”.

First things first, I understand that the vast majority of the time, the intentions of the person are good. I too was taught, way back when I started work in special education, that the correct way of speaking about our students was “person first language” (e.g. person with autism), and that the phrase “autistic person” (now known as “identity-first language”) was disrespectful or even offensive.

However, many years in the autism community have taught me that, in the majority of cases (albeit not all), the autistic population tends to prefer identity-first language. And in my experience, the phrase “autistic person” – far from being offensive – often leads to people without autism* taking offence on my behalf.

(*For the duration of this article, I will be using the phrase “people without autism” to describe those who are not on the spectrum. I know I’ve not consulted any people without autism on their language preferences, but regardless of this I’m encouraged by professionals to believe that this is the most respectful way of referring to them. And policy-makers know better than anyone with deeply personalised experience, I guess.)

Sarcasm aside though, the majority of this article can be summed up by the following two sentences:

It is up to us to decide how we identify. It is not up to others to decide on our behalf.

Like the saying goes in disability-related communities: nothing about us without us. If no autistic person has had any influence in a decision made about autistic people, then that decision is not valid.

So equally, when it comes to language choices, the person themselves should be the one to decide and nobody else gets to overrule them. That means that if I choose to talk about myself using identity-first language, nobody without autism has earned the right to correct my language.

The problem with person-first language (PFL)

The most frequent argument in favour of PFL is that autistic people are “more than their autism”; that one diagnosis should not summarise the entirety of a person.

So why is the word “autism” supposed to be thrown to the end of the sentence when these other facts about me aren’t?

In my opinion, it’s symptomatic of the prevailing attitude that autism must be seen as a negative attribute above all else. (From the moment I first realised this, I started to see those who insist upon PFL as having been trained to see autism negatively by default – even if only trained subconsciously by society – rather than mindful of both the strengths and struggles autism brings.)

The extra factor is that the argument is often taken too far. Like the people who say “you wouldn’t call someone with cancer a ‘cancerous person’, so why would you call someone with autism an ‘autistic person’?”

(And if the opinions of autistic people don’t persuade you, maybe ask a cancer survivor how they feel about being used for anti-autism rhetoric.)

More frighteningly, I have also heard the argument that PFL implies that if someone can be “with” autism, there’s a possibility that they can be without it too. That if autism is not seen as an intrinsic part of a person’s being, it can be seen as something that can be separated from the “real” person hiding beneath the autism.

What I mean is, this attitude can have dangerous consequences. You won’t find any cure-peddlers, snake oil merchants or bleachers (yes, they still exist) saying they can cure an autistic person.

You will, however, see them claiming they can cure a “person with autism”.

The biggest argument in favour of identity-first language is simply that the majority of autistic people prefer it.

Theoretically, that alone should win the debate forever. But unfortunately, autistic people have only recently started to have any influence in autism awareness circles, and the world is still playing catch-up with our preferences.

The more times this matter is researched, the more evidence seems to gather that the majority of those on the spectrum prefer IFL, to the extent that the National Autistic Society has changed their language policy because:

“The language we use is important because it embodies and can therefore help change attitudes towards autism. To reflect the findings of [our] research, the NAS has begun to gradually increase the use of the term ‘autistic’ – particularly when talking about and to adults in that group”.

(Ironically, the NAS frequently get “corrected” in the comments sections of their work by well-meaning followers, as a direct result of them listening to autistic people’s opinions.)

And for the 1.5 million British people who work for the NHS: since posting this article, I’ve also been informed that even our good old NHS uses IFL, as indicated on this page here.

More and more surveys are indicating the true preference of the autistic community – even a recent one by Autism Speaks, who don’t exactly have the most autism-positive history and have generally been seen as acting against the interests of autistic people, which had “I am autistic” as the preferred choice of 81.5% of respondents. (I imagine that lots of horrified Autism Speaks supporters were claiming “this isn’t a valid result- this poll just got hijacked by people with autism!” …Which was kind of the point. It’s our choice and always has been.)

And I have to admit: as far as I’m aware, the largest survey ever performed containing this topic was my own. In summer 2018 I ran a survey which was answered by 11,521 people, 3,431 of whom being confirmed autistic themselves with a further 2,320 suspecting they may be. (If anyone is aware of a larger survey, please do let me know and I’ll correct this paragraph.)

When it came to this particular question, here were the results: the difference between autistic respondents and those without autism being quite striking.

I’m aware of the counter-argument, by the way, that “this survey doesn’t count people with real autism, like those poor non-verbal people or those with learning difficulties”.

I’m also aware that not everyone will take the time to read the survey and investigate further, so I’ll mention here that yes it did.

One extra thing I really should mention (which sadly isn’t in the survey article, because I only discovered it upon interpreting the data out of curiosity last year), is the positivity difference among autistic people based on what they call themselves.

Plenty of autistic people agreed or strongly agreed with “if a cure existed I would take it”, as well as the sentence “autism has taken away from my life rather than added to it.” When I looked at the data closely, I discovered something surprising.

Obviously there were exceptions. In any sizeable data set, there always are. But since I discovered this pattern, I have come to believe that learning to call yourself “autistic” rather than “having autism” is an empowering positive step towards self-acceptance, rather than a mere personal preference.

Repeated surveys have indicated that the majority of us on the autism spectrum prefer IFL, with a small but significant minority choosing PFL.

Personally, despite the tone of this article, I actually don’t mind which I get called as long as the content of the sentence is respectful. (I’d much rather hear “people with autism are valuable and valid” than “autistic people need to be locked away”.) But however I personally feel, the statistics command respect, and totally warrant a change of behaviour from those who insist on terminology opposed by the majority of autistic people.

And in conclusion, please enjoy some high-quality identity-first memes produced for discussions just like this.

I hope this article helps put things into perspective, even if (and especially if) you have found it challenging. As always, anyone reading this is more than welcome to join Autistic Not Weird’s Facebook community. And for those who feel my work is worth supporting, here’s a link to my Patreon page for those who want to help me keep doing my advocacy for a living, in exchange for various rewards.