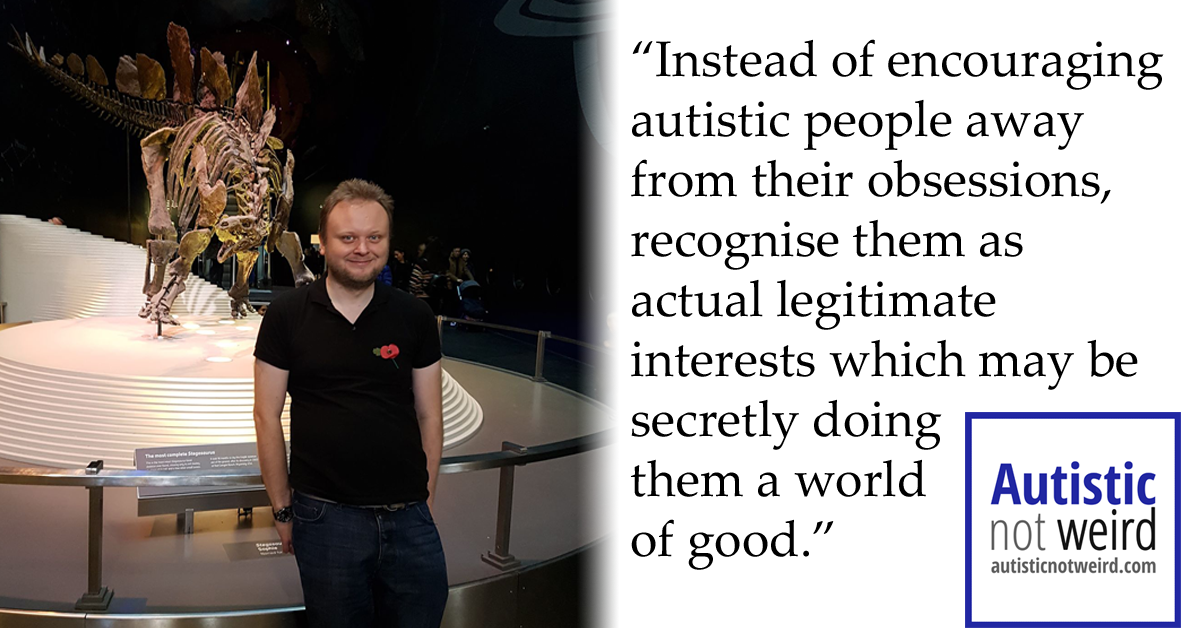 Autistic ‘obsessions’, and why we really really need them.

Autistic people are famed for their ‘obsessions’. Be it washing machines, vacuum cleaners or dinosaurs (hell yeah, dinosaurs!!), having obsessions is seen as an autistic trait.

And therefore, it’s something unhealthy. Or at the very least, deficient.

Now, people who hold those kind of obsessions usually struggle to articulate why they’re so appealing, or at least in ways that the other person can understand or relate to.

What is the difference between an interest and an obsession?

Sometimes they are one and the same- it’s other people’s perceptions that differ. Mainly because the way we express our love for things is less “normal” than the way others do.

For example, when I was about seven my main interest was dinosaurs. But whereas most young children would express their love of dinosaurs by pretend roaring and stomping around the playground, I expressed my love by telling people I wanted to be a palaeontologist (and telling them how to spell it), memorising geological eras from Precambrian to Pleistocene, learning Latin words so I knew what dinosaur names meant, and reaching the stage where I could grab a piece of paper and write down 91 different species by memory (yes, this happened when I was in Year 2 [first grade]).

If teachers had known about autism back then, I’m pretty sure this would have been an ‘autistic obsession’, rather than a legitimate interest.

The above does sound rather cynical, but I have to admit other people’s perceptions do change for autistic people.

For example, during my time in education I ran 16 different chess tournaments in six different schools, and some of them became… er… slightly competitive. My record was running two clubs in two schools at once, each with 32 competitors. It was insane. And awesome. But mostly insane.

I do not love chess just because I’m autistic.

(In fact, I tried not to feel too insulted when people implied my chess clubs were done out of my own selfish interest, rather than the sheer amount of good they did for the youngsters. It was a tiny number of people who implied it, but tiny numbers can feel rather big.)

Be careful before discouraging ‘obsessions’.

When I was 13, I was still a proud fan of Sonic the Hedgehog. Not just the games either- I was still reading Sonic the Comic, despite being ‘far too old’ for it. There were plenty of people who wanted me to “just grow out of bloody Sonic, you’re not a kid anymore.”

But… why should I?

Back at that age I couldn’t properly express how much Sonic the Hedgehog changed my life. Thankfully now I can, so here goes.

Sonic the Hedgehog made me an explorer.

Did you ever play those awesome Mega Drive [Sega Genesis] games? There were often a dozen different ways you could reach the signpost at the end. Not only did this give the gamer plenty of reasons to play again and again, but it influenced my curiosity. I applied this to the forests outside my house, until every single tree had been climbed, and every cliff face ascended and descended again.

(And then I went to school, where I was told that our generation never went outside because of games consoles.)

Sonic the Hedgehog made me a writer.

If Nigel Kitching ever reads this, he needs to know he’s a hero of mine. [Edit- rather beautifully, he did end up reading this. I was honoured.]

Sonic the Comic (Fleetway Comics) taught me that even comic strips could be gripping stories in their own right. Unlike the Beano, which I also loved, Sonic the Comic had some incredible plotlines, was big on character development, and valued storytelling over comedy. And bloody hell, could those writers tell a good story.

Sonic the Hedgehog taught me never to give up.

In the world of Sonic the Comic, Doctor Robotnik conquered the world in issue #8. Pretty heavy start. Sonic and his friends didn’t liberate the world until issue #100, three and a half years later. During those three and a half years, I watched characters I loved fighting an insurmountable foe, never giving up as long as there were people they needed to defend.

Whilst I was being told to ‘grow out of Sonic’, I was reading the stories, busily learning moral principles that would stay with me into adulthood: not least, why it’s important to stand up for what’s right even if the odds are against you.

Sonic the Hedgehog made me a good cousin.

When I became a teenager, I had a young cousin who was just growing into Sonic. That brought us very close together, especially when I wrote stories for him. This was before the days of the internet so we only spoke on the phone once every few months and only met face to face a couple of times a year, but wow those times were awesome.

I’ll forever remember me and my cousin growing up together with a friendship partly based on Sonic. Yes, it was also based on the fact that we got on really well, but several nights of reading him Sonic stories (and getting Hyper Sonic before the end of Sandopolis) helped a lot.

Then he became a teenager, and found other interests. Around the same time, I had another younger cousin who was just growing into Sonic… same story again.

If there’s one thing I want people to take away from this article, it’s this:

Instead of encouraging autistic people away from their obsessions, recognise them as actual legitimate interests which may be secretly doing them a world of good.

If you believe in parallel universes, there’ll be a universe where I obediently cast Sonic aside.

In that universe, I’m not starting an MA in Creative Writing because I never wrote all that fan-fiction that got me off the starting blocks. [2018 edit- I passed. With distinction. And a part of me thanks the Sonic the Hedgehog comics.]

In that universe, I never learned how to explore everywhere, whether locally or internationally.

In that universe, me and my young cousins aren’t very close because we never had much in common.

In that universe, I’m less willing to stand up for what’s right.

Next time you see an autistic child ‘obsessing’ over dinosaurs and you personally don’t like it, think about the parallel universe in the future where the child doesn’t become a palaeontologist.

We have the same love of things as everyone else. We just express it differently. And sometimes we rely on those interests more, especially if being popular in social groups is off the table. Losing an interest because of other people’s perceptions would simply be another reminder of why we’re not good enough.

And besides, dinosaurs are bloody awesome. Let us love them. 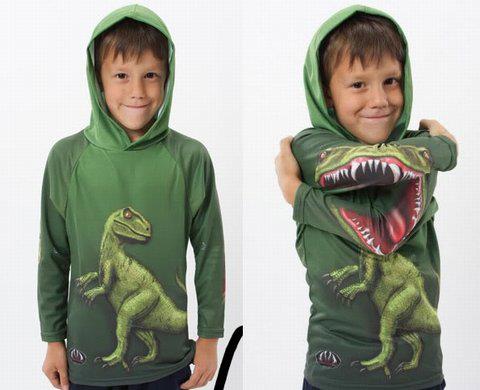 PS- those amazing hoodies can be found at http://www.mouthman.com!