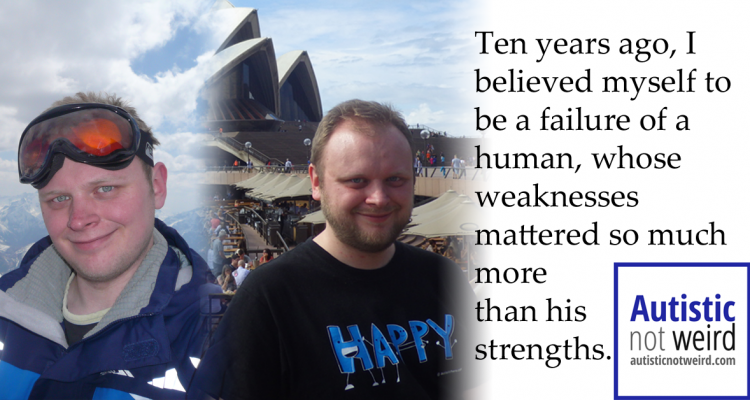 Ten years ago today, I learned I was autistic. Here’s how my life changed.

On 29th November 2009, my life started to take the opening few steps towards beginning to make some kind of sense.

After a lifetime of knowing I was different somehow to the general population (and too many years believing myself to be ‘lesser’ rather than different), a family member finally gave me an explanation for why, and it started a mental revolution for me.

My attitude towards my own brain has changed enormously: what started as a secret word to describe my faults has since become a genuine part of my identity, and a topic I talk to audiences about internationally.

Even though it took several years, I am so much happier for knowing I’m autistic.

Totally by coincidence, this happens to be the month when everyone on Facebook is doing the Ten Year Challenge. So, you can consider this my own. And as you’d expect, most of the changes have happened on the inside.

It’s amazing what ten years can do.

Ten years ago, I felt like an uninvited guest at the rest of the world’s dinner party. As if everyone else just had a natural place at the table, and I had to be given a stool and sit by the wall. It felt like I was trespassing in everyone else’s world just by being here.

Along the way, I learned that I may live in a world dominated by neurotypical people, but my existence is relevant and valid. And the lack of accommodation was the fault of them, not me: I deserved better, and so does everyone who’s now in the same place as I was.

Ten years ago, I believed that whenever there was a difference of opinion, I was wrong by default. After all, I was autistic. Which meant other people must have automatically known better than me.

Along the way, I learned that other people are allowed to be wrong too. It’s not a habit reserved for those who are different, even if we’re tricked into believing it.

Today I know that I have the right to be correct, and that my opinion deserves to be valued.

Ten years ago, I was taking my first steps into the world of unemployment. My self-esteem adjusted itself accordingly.

Along the way I learned about the woeful biases in the hiring process, and resolved one day to advocate for making things fairer for people like me – who don’t perform naturally well at job interviews and neurotypical expectations, despite having the potential to be brilliant at the job.

Today, I train employers on neurodiversity in the workplace. I’m also self-employed (like many autistic people), and hold four jobs. I work my own hours, on my own terms and at my own pace, and it works well for me. And I will never endure a job interview, ever again.

Ten years ago, I had no idea I needed therapy. That was for people who had “real” problems, not people like me. I wasn’t allowed to have mental health issues.

Along the way I learned how dangerous it is to refuse to seek help. And how claiming you’re not allowed to be sad because “other people have it worse” is as illogical as claiming you can’t be happy because others have it better.

Today, my Patreon supporters fund my monthly therapy. Now I’m on top of my mental health issues, and continuing my therapy to make sure that I stay ok.

Ten years ago, I believed myself to be a failure of a human, whose weaknesses mattered so much more than his strengths.

Along the way I learned that I was never a failure at all: I was simply in a place in life where I didn’t have chances to use my strengths. This started to change in 2013.

Ten years ago, I believed I was to blame for how everyone got offended by me all the time.

Along the way I learned that, even though it helps to learn about other people’s comfort zones, other people are responsible for their actions too. And when it comes to minor social errors, being offended is a choice – and certainly not worth making an autistic person feel worthless for.

Today, I know more about how to avoid stepping into other people’s comfort zones (although I’m far from perfect), whilst also knowing that just because someone is offended doesn’t mean they’re right.

Ten years ago, I used to stay quiet in large groups, stay quiet in the staff room, and stay quiet during small social events. It was easier than opening my mouth, which I feared would offend someone by accident, or that I would say something that resulted in people looking down on me even more.

Along the way I learned that if you have to tiptoe carefully around people for fear of their judgement, they’re not your tribe.

Today, you can’t shut me up.

Ten years ago I joined my local chess club, and it served as a weekly reminder that I wasn’t terrible at everything.

Today, I teach chess to autistic young people and I watch it build them up just like it did for me.

Ten years ago, I kept my autism as a dark and disgraceful secret.

Today, I have 112,000 Facebook followers because I chose to open up about it.

Ten years ago, I had no perception that a worldwide autistic community could exist.

Today, I’m happy to have so many friends in it.

Ten years ago, I wrote stories as a coping mechanism for unemployment. It was my way of having control over something, in a world where my future depended on everyone else’s choices.

Today, I’m an actual novelist – and one of those stories (a neurodiverse dystopia piece) has become my first novel. Its sequel is out next year, with two more in production.

Ten years ago, I took it for granted that I wasn’t worth listening to.

Ten years ago, I saw the word ‘autism’ as a synonym for ‘everything that is wrong with me’.

And finally – ten years ago, I felt like I had a duty to change myself into the non-autistic version of me who must have existed somewhere. After all, all those neurotypical people looked so happy, and I wanted to be part of their land of milk and honey where nothing ever goes wrong.

Along the way I learned that the real autistic me has value, and that the progress of humankind depends on diversity of thought. After all, most things ever worth invented were probably invented by either an autistic person or a dyslexic person. (Oh, and all the people around me were probably not living the ideal dream neurotypical life like I assumed. They just refused to talk about their struggles for fear of being ‘socially inappropriate’.)

Today, guess what? I’m still just as autistic as before, and doing far better than the fake neurotypical version of me could ever have done.

I think, after all these years, I finally became the man I wanted to be.

I don’t know. I don’t think I’ve ever had much of a plan for where my life goes. And I’m not a big fan of unpredictability. When I think about what life may be like in ten years at the age of 44, I naturally start to worry.

But unpredictability can go both ways: I mean, the last ten years had a happy ending. So I feel I can go forward without having to be afraid.

I should also probably mention the things that have stayed the same: my Christian faith, my voluntary youth work, my belief that the world is amazing even if my own life isn’t going as planned, and my relationship with my family. When life takes its twists and turns, it helps to know what remains consistent, and each of these things has helped me enormously with my stability.

To those reading this who are beginning their own autism saga, or are in as bad a place as I was ten years ago, please give yourself some time. Acceptance isn’t unreachable, and it gets better. The more you notice and define yourself by your strengths, the better off you will be, and I wish you all the best.

Well, this was trickier to write than I thought! But that’s all for now: as always, anyone reading this is welcome to join Autistic Not Weird’s Facebook community. And for those who feel my work is worth supporting, here’s a link to my Patreon page for those who want to help me keep doing this for a living (in exchange for various rewards).