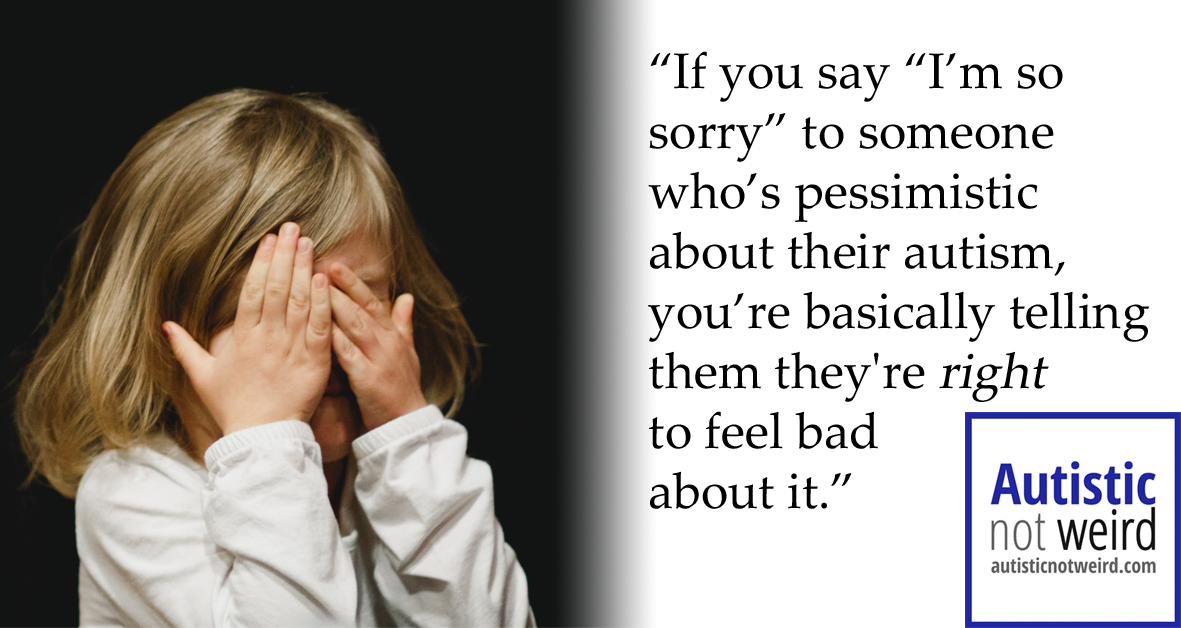 “You have autism? Oh, I’m so sorry.” What to say (and NOT say) to autistic people.

I make no apologies for my Asperger’s. And neither should anyone else.

To anyone who doesn’t know, the ‘I’m so sorry’ line is something that should never, ever be uttered to an autistic person. (Or, in fact, the parents of any child with special needs.)

At least, not about their autism. Other things, maybe, but not the mere fact that they’re autistic. I’ll go into detail below.

First things first though, I’m sure that everyone who says this means well. So I don’t want to go in all guns blazing (figuratively) against people who are honestly responding in the kindest way they know how.

This article is written to help you respond when someone says “I’m autistic” and you have no idea what to say next.

(For the record- if someone tells me they’re autistic, I usually high-five them. It’s rare that we bump into each other. We’re 1% of the general population.)

First off, five things you should NOT say.

There’s more than five out there (a lot more), but I want to leave room for positive things too! And in case this advice isn’t enough, there are

that may also help you.

Sorry for what, exactly?

No, be specific. What is it about our autism that you’re sorry about?

Some autistic people (myself included) do NOT see it as a life-limiting disadvantage. And others do.

If you say “I’m so sorry” to someone who’s optimistic about their autism, it’s quite patronising.

Worse still, if you say “I’m so sorry” to someone who’s pessimistic about their autism, you’re basically telling them they’re right to feel bad about it.

Sympathy is an important human reaction. But please be specific about what it actually is you’re sorry about.

To help, here’s a quick list of what you can and can’t be ‘sorry’ for.

You can be sorry if the person mentions:

You shouldn’t be sorry if the person mentions:

Again, at least the people who say this are honestly trying to be sympathetic. Unlike plenty of people who use this next line…

(I have since written an article entirely about this sentence [opens in new window], filled with glorious sarcasm.)

This is a widely condemned phrase, but it’s amazing how many people out there still use it.

Personally, my automated response is “what’s an autistic person supposed to look like?”

To demonstrate my point, let’s play a game. Take a look at these six awesome lads below.

One of them has Classic Autism.

One of them has Asperger Syndrome.

One of them has ASD (autistic spectrum disorder) and GDD (global development delay).

The other three are not even close to being on the autism spectrum.

Answers at the end of the article. Just to frustrate you. (Besides, some of these photos belong to autism pages you really need to look at, and it’s better to do shout-outs at the end.)

I think people expect autistics to look like the profoundly disabled children you see in the media- who don’t talk, never make eye contact, rock back and forth in their chairs, and so on.

But the autism spectrum affects people differently. That’s why they call it a spectrum.

And since we like to think we’re more than clichés, it does come across as derogatory.

Three reasons why this won’t work.

1) Not everyone on the autism spectrum is awesome at maths. That’s a stereotype spread by the movie Rain Man, which covers savantism more than autism. The stereotype has stuck for decades, because at the time barely anyone knew what autism was. Rain Man was their only exposure to it. (These days, Sheldon Cooper probably has the equivalent impact. But at least he’s funny.)

2) If you put someone on the spot with zero notice, it’s pretty uncomfortable. Often we (like other people) are brilliant at something until everyone’s staring.

Kind of an extension of “not looking autistic”.

(Warning: the following contains multiple, copious uses of the word ‘normal’. And I hate that word but I’m using it to make a point.)

I have worked with dozens of severely autistic children, and I can’t remember a single one who didn’t look me in the eyes once in a while. So even the stereotype itself is less accurate than you think.

I can promise you, people with Asperger’s or mild autism do make eye contact. Why?

Because it’s the normal thing to do.

All too often, the best defence we have is pretending to be normal. There’s nothing more tragic than blending into the crowd, but sometimes the crowd doesn’t meet you halfway. We learn how to make good eye contact so others don’t see us as being quite as awkward.

Or, to put it another way:

People with Asperger’s often know more about looking normal than most ‘normal’ people.

This is because normal doesn’t come naturally to us, so we have to actually study it.

Yes, we make eye contact. Because the alternative is not making eye contact, and being seen as ‘unnatural’.

You: “I have learning difficulties.”

Some guy: “Oh, we all find learning difficult once in a while.”

You: “I have a severe nut allergy.”

Some guy: “Oh, we all forget things as we get older.”

I don’t want to paint autism in a massively negative light: we DO have more in common with others than we think. And it IS true that we’re not alone in feeling isolated once in a while.

But saying “we all feel like that” as a response to someone’s problems is trivialising them: it’s taking something that an autistic person may see as a lifelong curse and telling them it’s not a big deal (and, therefore, they must be wrong to think it matters).

I don’t see my autism as a curse. Sometimes I actually find it awesome. But not every Aspie is as positive as me.

So what DO you say?

It depends entirely on the person, and how well you know them.

If you know the person…

You’ll know better than me how to personalise your response. But in general:

If you don’t know the person…

Examples of how people have done it right:

Old friends from school who I grew up with:

“Ah, that makes sense now I think about it.”

“That does explain a lot about [examples].”

“You’re the same Chris we’ve known for years. We’re here for you and everything, but it’s not going to change anything if you know what I mean.”

(During a conversation about the difficulty of romance) “Look on the bright side. You’ll never, ever forget your anniversary!” (He was fine cracking this joke because he knew it would make me laugh!)

(At the end) “That’s really big of you to tell us. Thanks for that.”

Teachers and headteachers I’ve worked with:

“Is there any kind of support you need?” and “is there anything you need us to adapt that would help you?”

“To be honest, I’m not too surprised. Because of [list of positive things they’d observed about me].”

And some general banter in the staffroom (there’s a note about banter below).

“I have to admit, I don’t know much about autism. Could you please explain it to me?”

“Well you’ve clearly done well for yourself, haven’t you?”

And, of course, people just generally being interested in hearing my perspective.

And finally, a little advice to autistic people.

When we talk about something that’s emotionally difficult (like telling people about our autism), it’s easy to get caught up in how we feel. So it’s VERY easy to forget how the other person feels.

Often, if the other person says something you don’t like, it doesn’t always mean they’re nasty or ignorant. Sometimes they’re just nervous! Because when someone says something important and you have no idea how to respond, it’s a little nerve-wracking. It’s that way for other people too.

Also, the other person will know that silence is not an option. They will feel like they have to say something. And if they know nothing about autism (yet), it’s difficult to find a good sentence to reach for.

Also (if the person knows you well), I’d encourage you not to be afraid of banter.

With most people, taking the mick out of my autism would be totally unacceptable. But we’ve known and trusted each other since we were 11, and having a close friendship means occasionally poking fun at each other, in a friendly way. It’s sort of a sign of trust- you trust them enough to know that they don’t mean it offensively, and they trust you enough to know you don’t mean it offensively either.

That said, make sure you can actually trust them before letting the banter begin. I’ve had false friends before. But if they are true, honest, close friends, jokes toward each other are fine.

…So, how many did you get right?

See? Told you there’s no such thing as ‘looking autistic’. 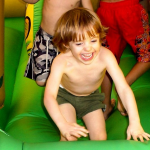 Number 1 is Quinn, who appears in the Growing Up Autistic article. But since he’s already been viewed 11,000 times on this site, I decided to use a much younger picture for the quiz.

His mother built this site and designed its logos. As you may have noticed, she is rather good at both web design and raising possibly the world’s happiest autistic boy. Show her some love, either on her main site (link leads to her insightful section about autism) or her Facebook page. 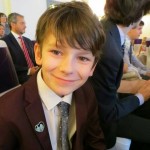 Number 2 is Morgan- a wonderful 11-year-old boy with Asperger Syndrome, who’s been the victim of severe bullying. He has his own Facebook page, “Planet Morgan: Aspie Superhero”, where people can show support for this awesome, awesome kid.

If you’re against the bullying of autistic kids, please view it, like it, and give him a big salute! 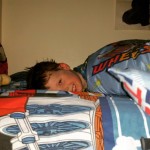 Number 3 is Charlie, aged 5. His parents launched “A Year in the Life of Autism”, which is both on Facebook and YouTube. They’re very supportive and deserve support in return. Hint hint. 🙂

If you picked 4, 5 or 6, you just misdiagnosed a child who has no trace of autism. (See how easy it is?)

All three are the sons of my friend Carol Anne, who has been absolutely invaluable as both a friend and a blog adviser. Unfortunately, there is no longer an up-to-date blog I can shout out to!

And a bit of geeky mathsy stuff:

There were 20 combinations of choosing three out of the six pictures. Only one combination involves getting all three wrong. So before you congratulate yourself on getting one of the autistic kids right, 19 out of 20 computers choosing randomly would also have chosen at least one of them correctly! (8 out of 20 would get two or more right, if you’re interested.)

These 20 combinations, of course, ignore the three totally different diagnoses among the boys. There is a massive difference between Asperger Syndrome and Global Development Delay, for example.

And if you got all six pictures right, please show off in the comments about how much of an expert you are on autism now. I look forward to you making successful diagnoses of random children you see in the street.